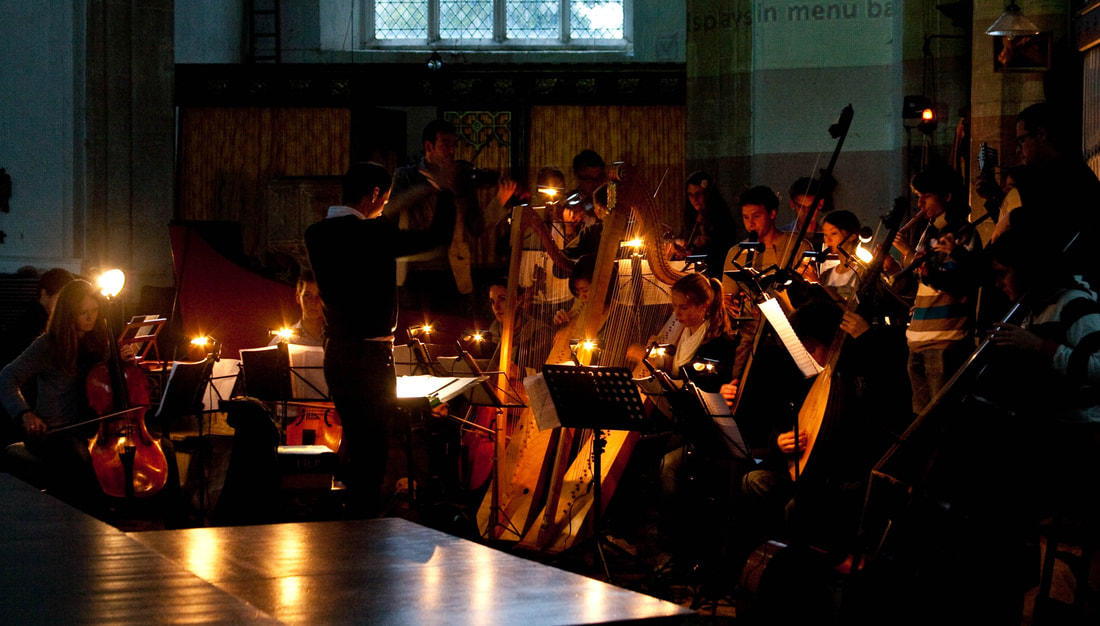 The Arts in Lockdown

The media has recently been full of the valiant efforts by the music and theatre professions to keep performance alive during lockdown. This ranges from leaving seats vacant in auditoria to self-sterilising door handles! But few of us could have foreseen six months ago that we’d be into a second period of confinement, albeit one a little less stringent than the first. As a retired performer my heart goes out to those young people who aren’t eligible for government financial support. And many of those who are eligible are being advised to change profession. For those who have dedicated their life to a career on stage or on the concert platform, such advice is both devastating and cruel. Yet there is little light at the end of the tunnel. For one group of young musicians, however, the second lockdown presented a unique opportunity they would otherwise not have had.

Playing in any musical ensemble is a huge challenge that requires physical and mental skills closely akin to those of a surgeon. In addition, being part of a string quartet (two violins, a viola and a cello) calls for finely-honed teamwork and highly advanced aural skills that can only be developed with hours and hours of practice. The quartet repertoire, as exemplified by those by Haydn, Mozart and Beethoven, includes some of the world’s greatest masterpieces that can only be tackled by ensembles who have played them dozens of times. The Echéa quartet has only recently left the starting blocks. They’re fresh out of the Royal Academy of Music and the Royal College of Music, where their junior fellowship was cut short earlier this year because of the pandemic. As part of their aims and objectives to help promising young performers, Simon Rowland-Jones and Barry Cheeseman, founders of the North Norfolk Music Festival, engaged the young quartet for a concert in November and had booked the Yorke Trust premises in South Creake for two long weekends to enable them to study and to be coached. Simon sent me a link so I could see their potential for myself and I was suitably impressed.

Hardly had the quartet set foot in the village when a panic email landed on my desk. A second lockdown was rumoured, meaning that the ensemble would be unable to meet for a month - a major set-back for their development as there was nowhere in London they would be allowed to work. Added to this, one of their members lives in Vienna! Could they lock down in Norfolk for the whole month? Fortunately, the Trust was able to accede to their request as all other bookings had been cancelled and the premises were free. They gave a preview concert early in their residency with an audience of about six people in the Trust’s newly re-decorated Old Chapel. And a very rewarding experience it was as they play with good musical instincts coupled with the vitality of youth. And rather than abandon their NNMF engagement altogether, they recorded a performance that was made available to NNMF Friends, proceeds from which helped pay for their stay.

‘It's an ill wind…’, as the expression goes. It came to mind that one of the greatest string quartets of all time, the Amadeus, had its genesis when three of its members were interned together on the Isle of Man after being forced out of Vienna by Hitler’s 1938 Anschluss. The quartet vowed to disband should any one of them die which, on the death of the viola player Peter Schidlof in 1987, they duly did. Their legacy includes over 200 recordings, which in itself is an awe-inspiring achievement. Internment of the Echéa in South Creake? Well, not quite. But one can only wish them every possible success in today’s rapidly changing coronavirus world.

The Yorke Trust will invite the Echéa quartet for one of a series of Benefit Concerts in the Old Chapel, South Creake, designed to help support and promote young musicians in these challenging times whilst also enriching the cultural life of the area. Details will be posted on the Yorke Trust website when national restrictions have been eased. www.yorketrust.org

A new series of concerts in support of young musicians who have been unable to perform to live audiences because of the pandemic.

Christopher was to have joined us in Norfolk to conduct the Yorke Trust's summer opera production of Handel's Jephtha this year after a stunningly successful Come & Sing Mozart's Requiem day in February and Jennifer Hamilton's memorable production of Purcell's The Tempest last July. Members of our community chorus, seasoned amateurs and those new to singing alike, were inspired by Chris' charisma and enthusiasm that gave even the most senior choristers the confidence to sing from memory, most having never done so before. His immaculate and detailed direction of the period ensemble Noxwode underpinned the production, some of the instrumentalists also performing from memory both on the stage and in various cornets of the church. He opened the ears, hearts and minds of all who worked with him, having that rare ability of being able to infuse levels of excellence in everybody, similar to those to which he himself aspired.  Conducting from memory and in bare feet added the final 'je ne sais quoi'!

Chris will be a hard act to follow. How tragic that such a promising career has been cut short so early.  All of us whose lives he touched have fond memories to treasure that will remain with us always.


The Yorke Trust, along with virtually every arts organisation in Britain and across the world has had to close its doors in the interests of public health. It is therefore with much regret that Trustees have decided to postpone until next year Jennifer Hamilton’s new summer opera production of Handel’s last dramatic work Jephtha.
Trustees, faced with the real prospect of permanent closure had two unexpected and life-saving surprises in April. First, the Borough Council waived Council Tax for twelve months and second, a generous and unsolicited National Disaster Resilience grant appeared in the bank that has enabled us to pay back some loans and settle bills for overheads that we might otherwise have been unable to meet with the loss of income from lettings.
Last year we were able to re-roof the Old Chapel’s former Sunday School Room and recent successful applications to the Jack’s Lane Wind Farm Community Fund and the Charities Aid Foundation COVID-19 Fund are enabling us to redecorate the inside of the Old Chapel while it is out of use. The room, partly refurbished 29 years ago, has never received its final coat of paint! Tagg Decorators Ltd are undertaking the work, scheduled for completion by the end of the summer. Norfolk Community Foundation have been extremely helpful with a number of our grant applications and Trustees are extremely grateful for their advice and assistance.
But this is not the end of the story. Whilst the immediate future remains uncertain, we hope to resume activities, health of the nation permitting, with a Come & Sing day on Saturday 27 February 2021 led by Christopher McMullen-Laird who ably took us through Mozart’s Requiem, thankfully weeks before the current pandemic arrived.
The Old Norwich Arms, our 13-bed cottage, is in need of upgrading after 29 years of regular use. It was last decorated by our caretaker Vickie May and her team a long while ago. (Vickie died in 2016 and the Trust’s memorial to her, a red May tree, is flourishing on Couth Creake village green.) And whilst major items have been replaced over the years (including the boiler, showers and kitchen equipment) new bed linen, mattresses and pillows are long overdue and funding for all this, together with redecoration, is now a priority. Thanks to the voluntary work carried out by Malcolm Wearing and his South Creake Summer Strings team as part of their Duke of Edinburgh’s Award, re-roofing of the garage is in progress and the building has once again been made weatherproof.
A more serious structural problem Trustees are addressing is the state of the flintwork on the roadside corner of the Old Norwich Arms. We have taken advice and are looking for funding to restore the corner, and will at the same time attend to other exterior delapidations largely caused by the increase in heavy traffic using Burnham Road.
Fingers crossed that by the autumn things will be returning to ‘normal’ and we can re-open our doors. Over the summer, mindful of any national restrictions that may be in place, the Old Norwich Arms is available for self-catering holiday lets for families and friends looking for breaks at home rather than abroad. Whilst the office is only open irregularly at the moment, emails and phone messages are being attended to as swiftly as possible.
​

Beth Wilson, one of the Yorke Trust's founders and its Vice-Chairman for many years, has died.

Living a few doors from me in Islington she, David Dunn and I spent long hours setting up, planning and promoting the Trust's aims and objectives. Her frequently unsung input involved applying a steady hand and issuing wise counsel to steer us on the right path, whether developing the pioneering mini-bass project to enable children to learn the double bass, purchasing and restoring premises in Norfolk, or branching into running ambitious residential summer opera courses for promising young singers and instrumentalists. She and her husband Mickie Rose drew many of their friends into the Trust's ambit, some remaining long-term supporters to this day. For all this, I will always be grateful.

Beth asked for donations in lieu of flowers in her memory to be given to further the Trust's work. In recognition of her devotion to our charitable endeavours the principal violinist's position for future opera projects will be named The Beth Wilson Chair. The first holder of this position will be Conor Gricmanis, founding leader of Noxwode, the young baroque ensemble engaged for next summer's opera production on 23, 24 and 25 July 2020. Further details will be announced soon.

Our aim at the Yorke Trust is to provide opportunities for students and children from all walks of life to study and to perform in the un-pressurised atmosphere of the North Norfolk countryside, away from the competitive environment of university and school. We have been doing this since 1984 and we have been doing it virtually free of charge.
Trustees invite you to join them in helping to continue this valuable work in the years ahead.

By becoming a Friend of The Yorke Trust, you join a group of supporters whose generosity provides a regular income to help us fulfil our aims.